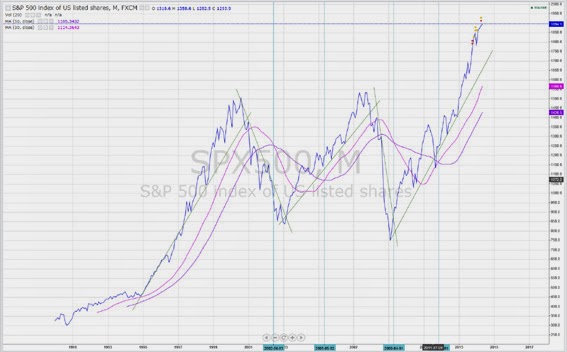 https://www.tradingview.com/v/uSHXhLGq
In his book "Big Money Little Effort" (2007) Mark Shipman presented a "Winning Strategy for Profitable Long-Term Investment."
He argued that the investor should not be guided by emotion, but by logic, should not try to buy low and sell high (i.e. predict highs and lows), but should follow a system.
The system he advocated was to follow two Moving Averages, a 30 day and a 50 day MA. (Shown on my chart coloured pink and purple respectively). We should buy when the shorter-term MA moves above the longer-term MA and sell when the cross-over goes the other way.
How would we have fared if we followed this advice since 1991? Well, I have pinpointed the sale-days on the chart, i.e., the points where the 50 day MA crossed over the 30-day, when we would have sold (6 Mar 2002, 1 Apr 2009) and the points where the 30-day moved over the 50-day (2 May 2005 and 1 Nov 2011).
Starting off with a good run from 1991 to 2000, we would not have fared as well as we might in the following years. We sold low in 2002, bought high in 2005, sold low again in 2009, but bought well in 2011.
We would have been better advised to act more promptly in response to market changes, selling when the graph broke through the Support Line (and certainly when it moved down through the 30 day MA), and buying when it clearly broke through the Resistance Line (and certainly when it followed by breaking up through the 30 day MA). On the other hand, why wait? Every time the Index moved too high above the MA the Index was about to suffer a correction. A shorter term MA than 30 days would give a clearer picture. (Go to www.TradingView.com and try for yourself).
TheIndex has at the present moved significantly above its 30 day MA, which presages a correction some time soon - before the end of 2014 - whether that correction be just a down-swing or a change in trend.
﻿

Support my blogs by making a small contribution

On Keynes:
Keynes's Way to Wealth: Timeless Investment Lessons from The Great Economist

Robbie Burns:
The Naked Trader: How anyone can make money trading shares